Trey Chafin is pictured with his Grand Supreme heifer at the Georgia National Fair Livestock Show in Perry, Ga.

Hart County High School FFA members notched several wins at the 2022 Georgia National Fair Livestock Show last week, but one local student proved to be among the best in the state and won the entire show.

The Hart County High School FFA chapter was well represented in Perry, as they had members exhibit beef cattle, market goats, market hogs and breeding gilts. The show runs for the first two weekends of October during the Georgia National Fair in Perry, GA.

Trey Chafin, a junior at Hart County High School, won big in Perry at the 2022 Georgia National Fair Livestock Show last week. Chafin brought home the Grand Supreme Heifer title with his Commercial Heifer, among the crowd of roughly 500 head of cattle in the heifer show. He not only won his class, won the Commercial Breed, but also won in the final overall heifer drive for the entire show — winning it all. Chafin also took home the 11th Grade Beef Showmanship title out of all 11th graders in the state.

“I thought I had a good chance,” Chafin said about his odds of winning heading into the show. “The commercial show is the hardest breed to win because you have to win your class, your division, and then you have to win the breed, where other breeds you just win your class and then you go to the breed drive. The commercial had 175 just in that one breed. So I had to win that and that’s hard to do.”

On Friday, Chafin added to his collection of 33 belt buckles when he won showmanship, which judges his abilities in showing the livestock.

“Then Saturday is the heifer show. That’s when they’re judging the cow. How good the cow is, how good it moves, its structure, and how pretty it is,” Chafin said.

Chafin has been showing livestock ever since he was in the fourth grade, so to win big in Perry marks a major milestone.

“It felt great. There were so many people yelling,” Chafin said about winning. “The arena is probably as big as a small college stadium.”

A lot goes into preparing for a show like this, Chafin said.

“It’s everyday,” he said. “We rinse them for 15 minutes three days a week and then two days a week they get washed. We rinse them because it cools their body temperature and makes them grow hair.”

Chafin now plans to compete in Louisville, Kentucky at the National show in November. 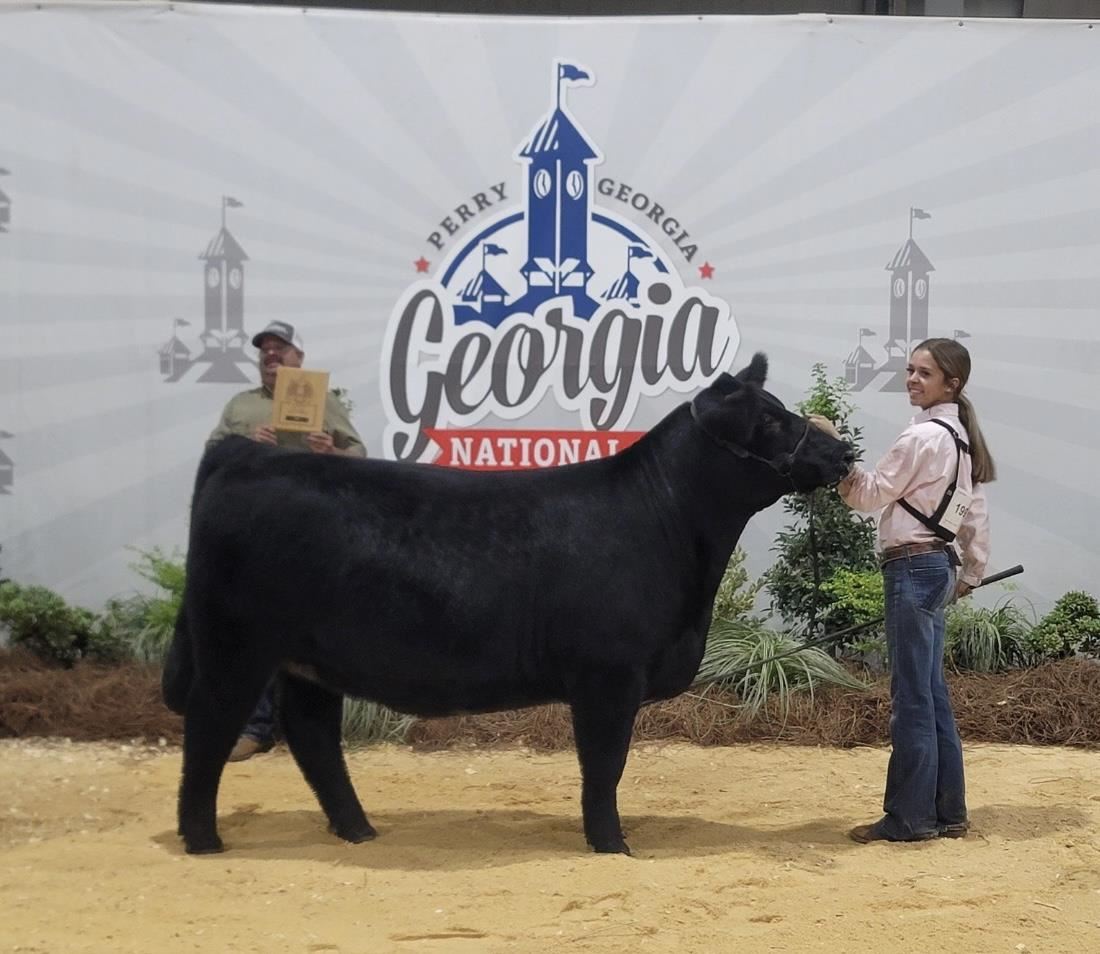 Ashlyn Floyd is pictured with her Maine breed champion at the Georgia National Fair Livestock Show in Perry, Ga.

Hart County High School senior Ashlyn Floyd also exhibited a breed champion with her Maine heifer, along with winning a class with her Angus heifer. Floyd was also in the overall final heifer drive, along with Chafin, with her prized Maine heifer.

John Payne Sewell is pictured with his class winning heifer at the Georgia National Fair Livestock Show in Perry, Ga.

John Payne Sewell, a sophomore, was also a winner the second weekend of the fair winning his commercial heifer class at the invitational cattle show.

Piper Bond is pictured with her top-placing gilt at the Georgia National Fair Livestock Show in Perry, Ga.

Along with the big wins, Katie Haulk, Abby Trotter and Hoke Dickerson also represented the Hart County Livestock Show Team inside of the arena.