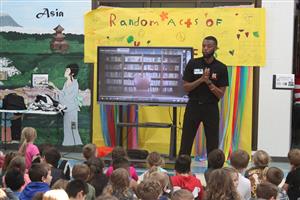 “Can we pinky promise to not hate people because of their skin color?”

That was the question athletic trainer Trae Gaines posed to a group of fifth-grade students at North Hart Elementary recently as they raised their curled pinky fingers along with him and gave an enthusiastic response of “yes!”

All throughout February, the Hart County Charter System has been celebrating Black History Month in a variety of ways at each of its five schools.

Trae’s question to the North Hart Elementary fifth-grade students came during a “club day” at the school that was centered around Black History Month. Trae was just one of many guest speakers who delivered different messages related to Black History Month and its importance.

At Hart County High School, different areas of the school celebrated the month in a variety of ways. Mr. Josh Bryan’s chorus class rehearsed music and Spirituals by Black American composers as well as viewed a daily slideshow about Black American composers. Mrs. Deedra Kotal’s science classes created mini posters about different famous African American scientists that were put on display in the hallway. Dr. Linda Frye and Mrs. Megan Milford’s American Literature classes read the play “A Raisin in the Sun” by Lorraine Hansberry that debuted on Broadway in 1959. The story tells of a Black family's experiences in south Chicago, as they attempt to improve their financial circumstances with an insurance payout following the death of the father, and deals with matters of housing discrimination, racism, and assimilation. The students then formed groups and created hexagonal thinking maps to connect themes of the play with characters using evidence from the text with quotes. The activity allows students to hone in on the text and think critically about it.

“I like the struggle and the conversation that has to happen,” Dr. Frye said about the activity. 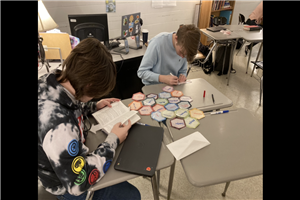 Students in Dr. Linda Frye’s American Literature class create hexagonal thinking maps for the play “A Raisin in the Sun.”

Hart County Middle School celebrated in a variety of ways as well across different subject areas. Mrs. Heather Mewborn’s 8th grade class learned about significant Civil Rights figures and created miniature monuments to those figures. The 7th grade social studies teachers had students independently research African Americans who made significant contributions over the years, but are not as well known. But it wasn’t just the history classes celebrating, Art teacher Mrs. April Garner had her 6th Grade students study African American Artist, Jean-Michel Basquiat, and create graffiti names. The 7th Grade students researched and created African Masks by utilizing a choice board, while the 8th grade students chose a poem, song, or quote written by a Black author and created a painting to represent the poem.

Learning about Black history continued at Hartwell Elementary School where students in Mrs. Kala Orsley’s class have been listening to read-alouds and learning about different African Americans throughout Black History Month. Just recently they watched a video clip about the ladies in the movie “Hidden Figures” which is loosely based on the 2016 non-fiction book of the same name by Margot Lee Shetterly about African American female mathematicians who worked at the National Aeronautics and Space Administration (NASA) during the Space Race.

The research into historically prominent Black figures continued at South Hart Elementary School where fifth-grade students researched and wrote reports about famous African Americans. Several of the South Hart students, Tristen Harper, Evva Barton, Ka'Darius Blackwell, and Brooklyn Warren, were selected to share their report during the January/February SOAR program. In addition, all students had the opportunity to read about famous African Americans through a February Choice Board pushed out through the computer lab that contained links to eBooks, articles, and videos.

It has certainly been a busy month celebrating Black History Month, and the Hart County Charter System thanks all of those who participated.