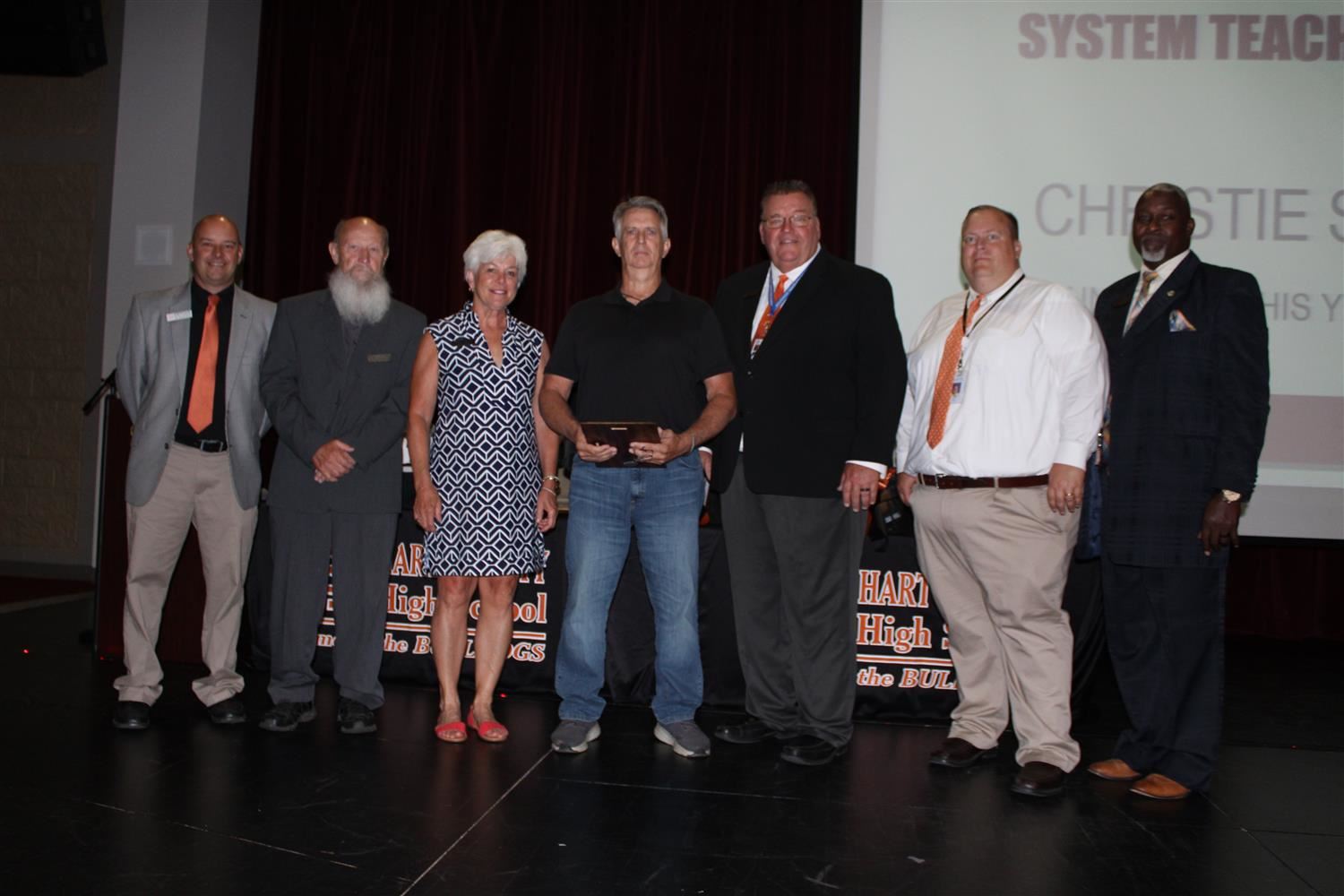 The Hart County Charter System is excited to announce its System Teacher of the Year, Mr. Mike Carey.

A 22-year teaching veteran in the Construction trades, HVAC, Electrical, Carpentry, and Plumbing, Carey is currently a Construction teacher at Hart County High School and a Welding instructor. Students have an opportunity to earn college credit through his classes.

“First of all, Mike Carey is a top notch person. He is first class in all that he does. He has an incredible work ethic and he cares about quality work. Those traits are hard to find. He wants his students to succeed in life. He doesn't look at teaching as a job, he looks at it like he is giving back to our community,” Superintendent Jay Floyd said.

“The motivation that inspires me to teach I would have to say is the ability to help a student to succeed in life. To be able to guide a young person towards a career that will help him do well for himself or family. It’s hard to beat that,” Carey said.

Carey said being selected as the System Teacher of the Year is leaving him feeling “overwhelmed.” In 2009, he was chosen by the STAR student to be the STAR teacher, but said he was “shocked” to learn he was the System Teacher of the Year. The announcement was made in front of his peers at Convocation, which gathers every employee in the school system before the new year begins.

“Only thing I can say is that I’m overwhelmed and blessed,” Carey said. “I’ve just tried to do my job the best I know how and to treat my students like they were my own.”

Around the Hart College and Career Academy, Carey’s students are known as “Coach Carey’s Boys/Girls” and administrators have taken note of the strong relationships he cultivates with his students.

“Relationships with students are important in education and Mr. Carey does an excellent job with that. He has helped so many students not only in his classroom but outside as well. His work in his classroom as well as Welding through ATC (Athens Technical College) is impacting our community,” Hart County High School Principal Kevin Gaines said.

Carey said there are many times when he is proud of current or former students. He often hears from many of them after they graduate.

“They will call, text or contact me through social media about where they are working, a promotion they have received or even a call just to see ‘How you doing coach?’,” Carey said.

Six of his students recently received their technical college certification in welding through the Hart College and Career Academy, earning them college credit, and multiple former students of his have landed jobs with local industries.

"Mike Carey has the ability to connect and build relationships as good as anyone. I've never met a student that didn't approach him with eye contact and a strong handshake. He teaches our students employability and soft skills that prepare them for a successful future and at the end of the day, our students respect that about Mike. They would run through a brick wall for him,” Hart College and Career Academy CEO Brooks Mewborn said.

“January 2021, the Georgia District 2 Public Health asked my wife to come out of retirement to assist with the COVID-19 vaccinations. Her response was ‘Yes’ without any hesitation,” Carey said. My Son Joshua Carey is an Industrial Engineer and works in Duluth, Georgia. He was one of my ‘Construction Boys.’ Michaela Carey, my daughter, is also an educator in Forsyth, Georgia. I’ve been blessed to have both my son and daughter to follow in a career that is related to mine.”

Outside of school, Carey’s biggest hobby is his horses. His family has a horse and cattle farm.

“We have been raising, showing and riding horses for over 25 years. This passion for horses is also shared by my daughter where not only she is an educator but also an equestrian riding instructor,” Carey said.

All-in-all, Carey said he’s been blessed over the years.

“To have a career in the same town you’re born/raised and become an educator at the same school I attended? Well I’ve come full circle. I’ve only taught at Hart County and had some of the best coworkers you could ask for. As for my students, heck when you spend up to 4 years with them 5 day a week, 10 months out of the year they become yours and you want the best life can offer for them. I’ve had tremendous support from family, friends and students. As for my teaching, credit has to go to God for leading and opening doors for me,” Carey said.

The Hart County School District does not discriminate on the basis of race, color, religion, national origin, age, disability, or sex in its employment practices, student programs and dealings with the public. It is the policy of the Hart County Board of Education to comply fully with the requirements of Title VI, Title IX, Section 504 of the Rehabilitation Act of 1973, the Americans with Disabilities Act and all accompanying regulations.

The Hart County School District does not discriminate on the basis of race, color, religion, national origin, age, disability, or sex in its employment practices, student programs and dealings with the public. It is the policy of the Hart County Board of Education to comply fully with the requirements of Title VI, Title IX, Section 504 of the Rehabilitation Act of 1973, the Americans with Disabilities Act and all accompanying regulations.
Copyright © 2002-2021 Blackboard, Inc. All rights reserved.