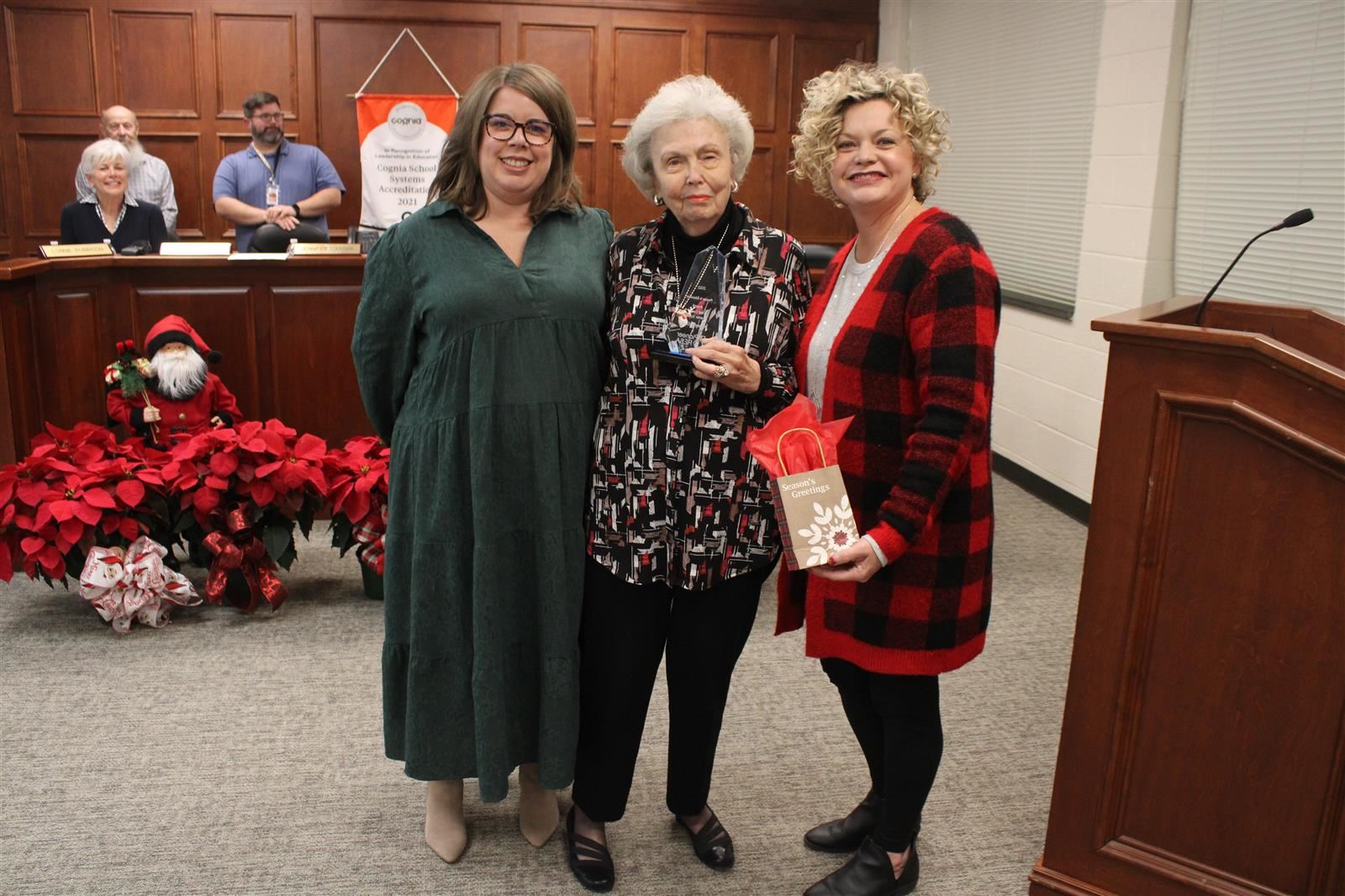 The Hart County Charter System is proud to announce that Mrs. Nancy Temple Clark, a longtime educator and Hart County Schools’ first female Superintendent, received the Pioneer in Education award at a ceremony held by Pioneer RESA on December 9 in Cleveland, GA. Mrs. Clark was also recognized at the Hart County Board of Education's regular meeting on December 12.

“I have watched and admired Mrs. Clark from a distance for many years. You see, I had the privilege of being both a student and a teacher under her leadership. She has always carried herself in a professional, sophisticated manner. Others, including me, still sit a little taller in her presence and never want to disappoint her,” Superintendent Jennifer Carter said. “As I have transitioned into my new role as Superintendent, she has served as a source of encouragement, consistently reminded me to laugh and enjoy this journey, and offered a listening ear. We see one another monthly. Each time we talk, she leaves me with a few more nuggets of wisdom and for that I am appreciative. This year, it gives me great privilege to name Mrs. Nancy Temple Clark as Hart County’s Pioneer in Education.”

The Pioneer in Education awards honor individuals who go above and beyond every day to support our students and staff. Whether the service is to provide exceptional instruction, to create or strengthen community support, or to lend a helping hand and a shoulder to lean on when our students and families need help, these individuals stand out in their efforts to make a difference.

"I have been so blessed to receive some other nice awards, but this one is special," Mrs. Clark said at the board of education meeting Monday night. "You always hear the expression 'when you love what you do, you never work a day in your life' and I loved what I did. And I always thought that was reward enough, but this is a treasure."

Mrs. Clark truly exemplifies what it means to be a “Pioneer in Education”. Like so many in the field of education, she began her career as a teacher, serving in North Carolina, Georgia, Virginia, Kansas, and even as far as Hawaii. In 1979, she returned to her hometown and became a teacher at Hartwell Elementary School, where she later served as the Assistant Principal from 1984 until 1987. Staying in Hart County Schools, Mrs. Clark became Principal of Airline Elementary School in 1987, where she served for three years before becoming the Assistant Superintendent for Instruction of the Hart County School System. After dedicating 12 years to that role, Mrs. Clark made history by becoming the first female Superintendent of the Hart County School System in 2002. Stepping down from the Superintendent position in 2007, Mrs. Clark worked as an Educational Consultant with the Newton County School System for two years where she developed a project to review and evaluate the system’s teacher induction program. Mrs. Clark holds numerous degrees including a Bachelor of Science degree in Home Economics from North Georgia College, a Master of Education degree in Middle Grades Education from the University of Georgia, and an Education Specialist degree in Educational Leadership from the University of Georgia.

Retirement hasn’t really seemed to slow Mrs. Clark. She continues to be a leader in our local community. She currently serves as the Chair of the City of Hartwell Preservation Commission, the Chair of the Hart County Library Board, an Executive Board Member of Hart Partners, a Community Action Team member for the Dolly Parton Imagination Library, Chaplain of the John Benson Chapter Daughters of the American Revolution, and an active member of the Hart County Historical Society, the Hart County Retired Educators Association, and the University of North Georgia Alumni Association.

Just this past October, Mrs. Clark worked the Mayor’s Monster Mash and registered almost 50 children for Dolly Parton’s Imagination Library. She most certainly knows that early literacy is the key to future academic success.